(This article was printed in the Walking Horse Report August 26, 2011 and was written by
Sharon Higginbotham. Only the photos have been changed or re-arranged to fit the website) 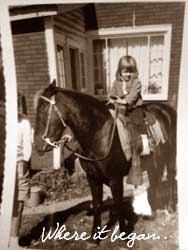 Karen and Bill Bean call Tomball, Texas, and Shelbyville, Tenn., home now. Having been introduced to Tennessee Walking Horses only three years ago, they have already developed a meaningful and lasting commitment to the horse, the industry, and the people they have met along the way. Say Karen and Bill, "In that short time, we have made so many friends whose company we enjoy…people who share our interests...wonderful people who are really good friends. It’s just been great".

Karen relates how it all started. She was born and spent her young years in Ohio. At the early age of four, her grandmother discovered her love of horses when a neighbor from about a half mile down the road called and said, "Your little granddaughter is here asking if she can ride our horses". They did not even know she had managed to sneak away to go and visit the horses. From that time on, her dad promised her that when they moved to the country she could have a horse. They did, in fact, move to the country, but the horse never materialized and other interests took Karen's attention as she finished her education and started a career. Karen spent her working career in Texas, having moved there in 1980 after graduation. She is now retired from her job as purchasing agent in the oilfield business.

Bill was born and raised in Cypress, Texas, not far from Tomball where he and Karen have their primary residence. He doesn't remember thinking about horses at all. From a very early age, he was a businessman. He started his first business, a machine shop, when he was still in high school. Over the years, he has started or bought several manufacturing businesses and, today, owns manufacturing companies that keep him busy and traveling.

A little over three years ago, Karen decided she was going to pursue her dream of having a horse. She and Bill decided they wanted a little more room than their home in Tomball provided, and they had the opportunity to buy a farm outside of Tomball where they began to plan for a new house and a horse barn. It was at this time that Karen remembered her old neighbor, Sammy Shaw's advice, "If you are going to buy a horse, make sure it’s a Tennessee Walking Horse….that’s the Cadillac ride"! So, Karen made a trip to middle Tennessee with a two-fold purpose…to check out how the horse barns are built and to buy a Tennessee Walking Horse to take back to Tomball.

Karen arrived in Shelbyville around the time of the Celebration that year. She had never attended a Celebration before, but quickly became anxious to do so. She visited Rising Star Ranch and met Mike Hicks who was stallion manager at the time. Hicks showed her all the stallions, broodmares, weanlings, and yearlings at Rising Star and explained about the performance horses and the upcoming Celebration.

On that visit, Karen spotted and fell in love with a weanling. She continued to visit all the towns in the area: Lewisburg, Fayetteville, Tullahoma, etc. At every stop, she asked about horses, trainers, shows, and soaked up all the information she was given. She found the locals willing to share information and welcome a newcomer. She attended her first Celebration, went back to Rising Star Ranch and bought the weanling that had caught her eye, attended the Sand Creek Sale and, by the time Bill arrived, had purchased three horses there. On the recommendation of Hicks and other people with whom Karen had talked, the Beans visited Mickey McCormick Stables where Karen rode a padded horse for the first time and purchased her first show horse, Roulette Riches, and asked McCormick's advice on their other purchases. Since that time, McCormick has advised them on their horse selections and taught Karen to ride. At present, the Beans have three show horses, several broodmares, yearlings, weanlings, and pleasure horses.

The building of a new home and barn in Tomball was put on hold while the Beans built a beautiful new home down the road from Rising Star Ranch which they call Just Horse'n Around Ranch. They are in the process of remodeling the old barn on that property now. They only have two trail riding horses remaining in Tomball, as the broodmares and babies are here in Shelbyville, along with their trail-riding horses. Karen has been venturing out with friends on some area trail rides. At first, she was a bit intimidated by the hills, creeks, and rocks she encountered but states that now, although challenging, it is really fun and something she fits in whenever she can.

Karen goes on to say that during school and in her career, she was always very anxious and nervous when she had to speak to numbers of people or perform any task in front of people. She states she was amazed at how calm she is when she is riding either on trail rides, at the barn, or in the show ring. She said she is not nervous in the least and is able to focus completely on the task of riding.

Bill says, "When you are able to find a hobby at our age about which you can be as passionate as Karen is about her horses, you are blessed. I am so fortunate to share this with her. She loves the horses. I love all the other aspects that go with it…our friends, the camaraderie of the other customers at Mickey’s barn, the weather of middle Tennessee, our new home here, and, most of all, seeing Karen having such a great time doing something she has always wanted to do"!

Don't feel sorry for Bill! He has a hobby about which he is passionate, too. It’s the W. B. Stagecoach Ranch in George West, Texas. For the past several years, much of Bill's free time has been spent at the game ranch that raises "better buck deer" and several exotics. He is really knowledgeable about the genetics of breeding deer that are more muscled up, have larger rack spans, and make a better specimen. Karen accompanies him to the south Texas ranch whenever she is able and they enjoy just getting away from it all and being together. On the ranch, Bill says, "I have all the horses I need. They are all under the hood of a John Deere tractor or other farm equipment".

A hobby that Bill and Karen share that also involves "horse power" is motorcycle riding. They enjoy taking their Harley Davidsons into the hills of Texas and doing distance rides with friends. Karen says that the horse shows have really cut into their motorcycle riding time, but they hope to get in some rides in the fall.

Their neighbor in Tomball, A. J. Foyt, introduced them to IndyCar racing, which is another "horsepowered" sport they enjoy. They have watched the Indy 500 from the pit with Foyt and his team. The pit crew has actually put Bill to work a time or two. Karen says it is really exciting to watch the race from that vantage point, but the noise level makes it so that you can't share your thoughts until the race is over. 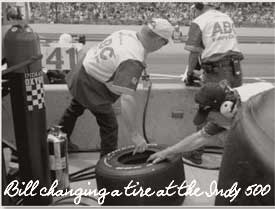 When asked if she jumped in to horses too quickly, Karen says, "Some of the horses we bought didn't work out for the purpose we planned, but I don't regret one purchase. Some people said we paid too much for this one or that one, but, again, I don't regret one purchase. We like to give the horses every opportunity. If they don't make it in one division, we like to give them an opportunity in another. If they don't make the show ring, we like to give them the opportunity to make it as trail horses. Every horse has its place and purpose but it sometimes takes time to figure out where it is best suited. We have been fortunate in that only a couple didn't work out at all". Karen's favorite horse, Jose's Rocket Man, with whom she enjoyed a great deal of show ring success early on, died over the winter. Because he was so young, it was a big shock and he is greatly missed.

Certainly, Karen and Bill are passionate about their hobbies, but the Beans are also passionate about family. They recently had a big family reunion at their home in Tennessee with brothers, sisters, aunts, uncles and cousins from Ohio, New Jersey, Colorado and Texas. The Beans have two sons, Jesse and Cory, ages 24 and 21, who are both in college. Cory has spent the summer in middle Tennessee, helping with the barn remodeling and trail riding with his mom. He really enjoys the horses and hopes to be able to incorporate horses into his life after he graduates from college. 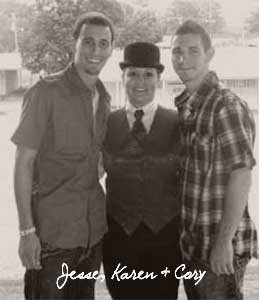 Many horse show classes or divisions are sponsored by Just Horse'n Around Ranch, and this year Just Horse'n Around Ranch has sponsored the Riders' Cup Aged Mares & Geldings Division. But, the Beans are quick to point out that they like to help the industry as much as they can, especially the local shows, as they really feel a part of the local community that has welcomed them so warmly.

When asked about these relatively new customers, Mickey McCormick said, "I have to tell you a funny story on myself first. Mike Hicks told me he had met these nice people who were interested in getting started with walking horses. I thought he said Karen and Jim Beam (like the whiskey). Karen and her brother Jeff came out to the barn first to talk to me about breaking a couple of colts they had bought at the Sand Creek sale. I don't think I met Bill until about Christmastime that year but Karen and Jeff came several times. I asked Jeff when Jim was coming. Jeff said "Jim Who"? We even made the first bill out to Jim Beam".

McCormick goes on to say, on a more serious note, that the Beans have been great for the walking horse business. "Karen loves the horses and she tries very hard to learn to ride her horses, takes our instruction very well and applies it. Bill is the typical 'horse show husband'. You couldn't make him ride, but he really gets a kick out of seeing Karen ride, show and be successful. They are always willing to lend a hand whether it is to sponsor a class at a horse show, cook a meal for our barn family, or invite my family for a little R&R. They have been good to the industry and good to my family. They are tops in my book".